Thank you for reading!

If you need to purchase a subscription.

A physical education teacher at Crestview Middle School in Huntington was arrested on multiple sexual misconduct and child molestation charges on Monday.

“It has been brought to our attention that legal action has been taken in regard to an employee of the Huntington County Community School Corporation,” the statement reads. “Appropriate actions were taken by HCCSC Administration immediately upon notification of this matter. Our No. 1 priority is always the safety and security of our students and staff members. Due to this being an open investigation, we are unable to comment further.”

A detective with the Fort Wayne Police Department had probable cause to believe between 2011 and 2014, Gerdes committed crimes against a minor while Gerdes was a teacher at Imagine Master Academy, according to court records.

As a teacher at the academy from 2011 to 2013, police say he committed the first two counts of sexual misconduct, where Gerdes allegedly had the victim perform oral sex on him several times in his classroom during the time frame.

Between Jan. 22 and Nov. 2, 2011, Gerdes reportedly committed the third count of touching and fondling, touching the victim inappropriately, according to the affidavit.

Gerdes allegedly committed the fourth and fifth counts of vicarious sexual gratification and dissemination of matter harmful to minors during Jan. 22 and Nov. 2, 2011. According to the affidavit, Gerdes was accused of watching the minor perform lewd acts over video chat for him several times and made the victim perform oral sex on him and perform lewd acts on him several times.

The crimes were committed in Fort Wayne in Allen County. Gerdes is expected to attend a hearing on April 6, 2020 in Allen County Superior Court. Gerdes entered a corporate surety bond of $35,000 in the Allen County Clerk’s Office on Tuesday, Feb. 11.

Mayor Richard Strick is pictured during his first speech as Mayor of the City of Huntington on Jan. 1 in the City Building. Strick addressed the transition into office during Tuesday's City Council meeting.

Mayor Richard Strick shared his state of the city address which focused on the city’s transition with a new mayor in office and goals for the next year.

The short phrase “remarkably smooth” has become Strick’s new standard response when asked about his transition into the new role as mayor of the city of Huntington.

When Strick first took office on Jan. 1, 2020, he offered city department heads the opportunity to stay in their current positions, which all of them chose to keep. Strick says this decision was a key reason why the transition into the new administration has gone so well.

“After reviewing the annual reports from 2019, which you’ve also had a chance to review and listen to newly elected mayors around the state of Indiana, I can confirm that that was a wise decision,” said Strick. “That decision is the primary reason why our transition has been as smooth and seamless as it has been. 2019 was another year of effective and efficient public service by our city employees. I look forward to seeing how we can improve on that in 2020.”

Previous Director of Public Works and Engineering Anthony Goodnight and his predecessor Adam Cuttriss were able to oversee the final landfill closure, a completion of the State Street project and long-term control plan, replacing the West Park Drive culvert and helping other departments in the city operate more efficiently, according to Strick.

Director of Community Development and Redevelopment Bryn Keplinger and his team partnered with Huntington County United Economic Development to voluntarily annex 187 acres of land for new industrial development. They closed out the 2015 Brownfield Grant while continuing demolition efforts at the old H.K. Porter site and assisted property owners with their permits.

“In comparisons across the region and across the nation, the city of Huntington stands out favorably by providing a faster turnaround and lower fees for those with permits,” Strick said.

Strick gave a shout out to Street Superintendent Tim Bischoff and his team at city services for their works to maintain the 95 miles of paved streets within the city, as well as the contract the city holds with Advanced Disposal and Republic Services for trash and recycling curbside pickup.

Utilities Superintendent Pat Maher works closely with both the street and engineering departments to continue improving the city’s waste and wastewater distribution systems, according to Strick. In May 2018 they began a four year plan to clean and televise every sewer and storm line in the city of Huntington.

“This proactive survey allows the team to identify blockages and sections of the system needing repair before they become critical issues to our customers, being proactive in our maintenance plans this way,” Strick said. “It also compliments the work of engineering and public works by mapping those sewer tanks and water lines in cooperation with the county, which allows us to provide better targeted service to city residents when there is an issue.”

“I think it goes without saying, it’s good news when your water and wastewater treatment plants have been operating smoothly in the background with nothing newsworthy,” Strick said.

Parks and Recreation Superintendent Steve Yoder works with his team to maintain and enhance the city’s “exceptional system” of public parks and facilities, according to Strick, in addition to access to a well-designed trail system and compelling programming.

“2019 was another year of good work in every department,” Strick said. “The city of Huntington will continue building on those successes and addressing our shortcomings in 2020 and beyond. This our time to grow in our effectiveness as we serve our families, our friends and our neighbors. As we move into 2020, planning to address the remaining projects and long-term control plan has already begun.”

The long-term control plan, according to Strick, started in 1972 as a way to regulate and limit the amount of raw sewage that flows into American waterways across the nation including in the Little River and Wabash River in Huntington.

“It is an unfunded mandate from the state of Indiana and federal government, but it is a mandate that brings immediate and positive impacts on our city and its residents,” Strick said.

“The City will be working closely with city common council members and the public to make sure that they are fully informed in each step along the way. These are not small commitments we are making but they are necessary to ensure we stay in compliance with state and federal statutes. When we have successfully completed these duties, we can rest assured that we’ll leave Huntington’s infrastructure better than we found it.”

Strick also addressed the drug epidemic affecting the nation, including the city of Huntington and shared

“Many of us here in Huntington have experienced or are aware of similar tragedies,” Strick said. “Too many funerals, too many lives ruined by a drug epidemic that is sweeping our nation that seems at times devastating and overwhelming.”

The Mayor’s Task Force on Addiction and Opioid Recovery plans to meet on Feb. 19 of 2020 to work on a survey that will identify what programs and services are being provided within the community, including those in the faith-based sector, social services, within the city directly, the school corporation and any other entities.

“We’ll also be looking at other communities to see what’s working well in those places because there’s no sense in reinventing the wheel when we can borrow somebody else’s design,” Strick said. “We also want to make sure that they’re providing recommendations for things that our city can give to help our friends and family through their struggle. Recovery is a difficult road and it’s essential that we commit to supporting one another in the walk we have together.”

The city will also hire a new communications coordinator on Feb. 18 to provide better communication with the public, according to Strick, who says the position “will serve the city well as we work to increase our efforts to navigate challenges in the ever-changing media landscape.”

Strick says the next four years look promising, and expects the city and its residents to step up to the challenge in order to grow.

“I can promise you there will be bumps and bruises along the way,” Strick said. “There will be things that we get off track with and it’s our best efforts to bring us back on course that will make the difference, because anytime humans are involved you can count on misunderstandings and failures to communicate.”

Mayor Richard Strick will also deliver the State of the City address on Friday, Feb. 28 at 7:30 a.m. at Pathfinder Services in Huntington at 2824 Theater Ave. 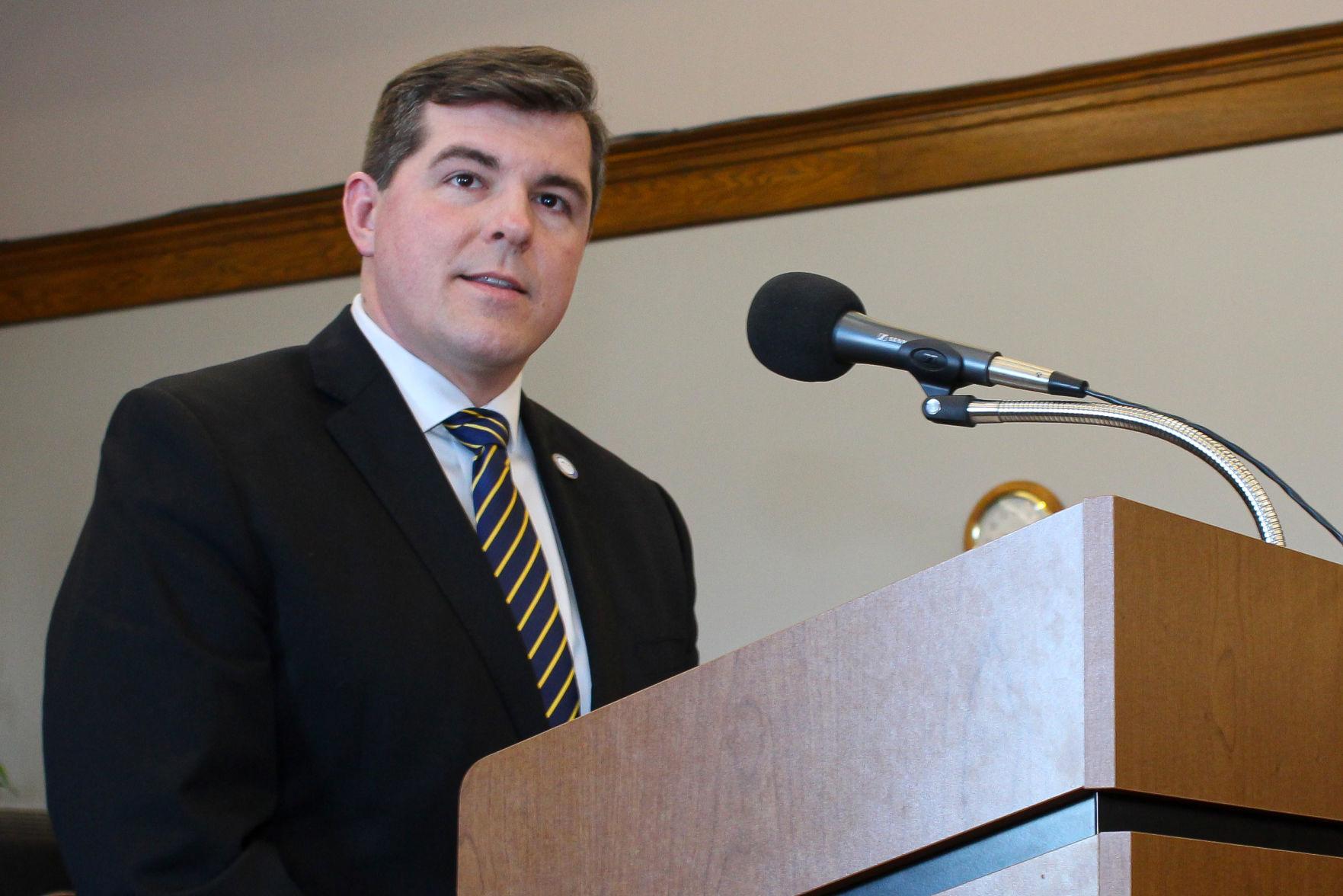 Mayor Richard Strick is pictured during his first speech as Mayor of the City of Huntington on Jan. 1 in the City Building. Strick addressed the transition into office during Tuesday's City Council meeting.