If you need to purchase a subscription.
Home
News
Sports
Obituaries
Opinion
Classifieds
Jobs
Archives
e-Edition
Contact Us
Share This 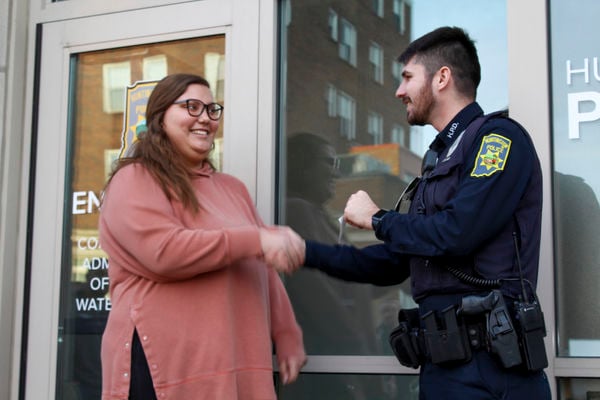 TEAM MIKAYLA: Officer Clatyon Baker of the Huntington Police Department presents Mikayla Skinner with a check for $1,400 to help support her battle with leukemia on Thursday afternoon at the City Building. 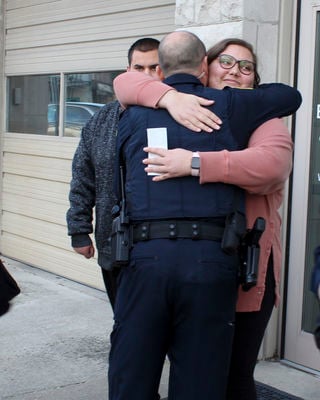 SUPPORT: The officers shared words of encouragement along with several hugs with Mikayla and her family following their donation of $1,400 toward Team Mikayla on Thursday evening. 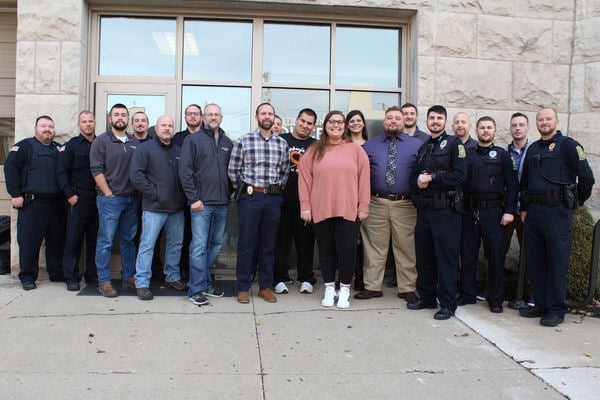 TEAM MIKAYLA: Officer Clatyon Baker of the Huntington Police Department presents Mikayla Skinner with a check for $1,400 to help support her battle with leukemia on Thursday afternoon at the City Building.

SUPPORT: The officers shared words of encouragement along with several hugs with Mikayla and her family following their donation of $1,400 toward Team Mikayla on Thursday evening.

The Huntington Police Department took part in “no shave November” to support a local woman in her battle against an aggressive form of cancer.

Mikayla Skinner is a senior at Ball State University with a heart for philanthropy, raising money for children at Riley Hospital at dance marathons and working at Pathfinder Services in Huntington.

In the middle of a relatively normal life for a college student, Skinner’s mom, Kristina Alvarado, says “everything in our life was turned completely upside down.”

Skinner was on fall break when she went to the doctor for symptoms resembling mono, but after a few lab tests, she was rushed to the emergency room. It was Monday, Oct. 7 when a doctor at Parkview North told her she had an aggressive form of cancer known as B cell acute lymphoblastic leukemia.

“The ER doctor kind of just ripped the Band-Aid off, he didn’t try to sugarcoat anything he just said that my white blood cell count was panic level high at 150,000 and it’s supposed to be between 3,000 and 10,000 and he said that’s a common sign of leukemia.”

Initially, Skinner was worried she would have to drop out of school, but she has been able to put everything on hold instead. Skinner says her professors are working with her, although she won’t be back on campus until next fall at the earliest.

Skinner has suffered allergic reactions to her chemotherapy treatments including vasovagal attacks, where her heart rate went up to 150 beats per minute and her blood pressure bottomed out.

“That happened twice in the hospital,” said Alvarado. “The first time that it happened they brought in the crash cart because her blood pressure was so low she was unresponsive. It was a very scary time for all of us and then it happened again.”

“She’s got numerous chemo treatments ahead, another bone marrow biopsy to see whether she’ll have to have a bone marrow transplant,” Alvarado said. “We’ll cross that bridge when we get to it.”

Skinner was well enough to visit the Huntington Police Department on Thursday evening, where she shared her story and received support and encouragement from officers.

Clayton Baker of the Huntington Police Department says he and fellow officers were looking for a way to “humanize the badge,” to show the public that police officers are humans just like everyone else.

The officers decided to participate in “no shave November” and to raise funds for a worthy cause. Baker says when they found out about Skinner’s battle with leukemia, “it was like the last piece of a puzzle.”

22 Huntington Police Officers grew beards for the cause and between their own personal donations and donations from friends and family, they were able to donate $1,400 to Team Mikayla to help cover expenses in her struggle against cancer.

“From hearing about you working at Pathfinders and doing Riley Dance Marathons and being in school, being local, you deserve our support 1000 percent and we just want to show you guys that we understand that you’re going through tough times,” Baker said. “And we want to be here to help you.”

The beards have not gone unnoticed by people within the community, and many have inquired about the new facial hair. Baker says it’s an opportunity for them to share Mikayla’s story.

“We can share your message and them, ‘We grew our beards this year for Team Mikayla,’” Baker said. “And we told your story to everyone who asked.”

This is our village

Alvarado says the Huntington community has been “overwhelmingly supportive” of Skinner and their family during the cancer battle.

“We had our fundraiser on Nov. 23, and we had so many people, I’d say we had over 200 people and we raised quite a bit of money,” Alvarado said. “Just to have that takes your breath away, to know that many people care about us.”

Alvarado says her family originally decided to stay in Huntington because of the support the family received surrounding her son with autism. The support they’ve received in the Team Mikayla cancer battle from the community has only given them more reason to stick around.

“I actually work in Warsaw and everyone is always asking me, Wwhy don’t you move to Warsaw?’ and it’s because this is our village,” Alvarado said. “This is where our community, our friends, our family are. Everyone has been so wonderful to take care of us.”

Skinner continues to give back to her community and those around her despite her fight with cancer. During her last three years at Ball State she participated in dance marathons raising money for the Magic Castle Cart, which gives toys to children while they’re in the hospital, along with raising money for the Palliative Care Program, focused on providing relief from the symptoms and stress of the illness to improve quality of life for both the patient and the family.

Skinner also works at Pathfinder Services, a decision she made after her brother Danny was diagnosed with autism at age two.

“It’s always been a huge part of my life and I’ve just always known that was something that I wanted to do,” Skinner said. “A lady there has worked with him for six years and ever since she’s worked with him she’s told me that I was going to get a job there when I turned 18. That was just something I had always planned on doing and I loved every second of it.”

Danny Skinner, Mikayla’s brother, made a special pillow at Pathfinder Services for a silent auction at the Team Mikayla benefit on Nov. 23 to help raise money for his sister’s cause.

The Huntington Police Department is creating a video to help raise awareness for Team Mikayla on their Facebook page.