If you need to purchase a subscription.
You are the owner of this article.
Edit Article Add New Article
Home
News
Sports
Obituaries
Opinion
Classifieds
Jobs
Archives
e-Edition
Contact Us
Share This 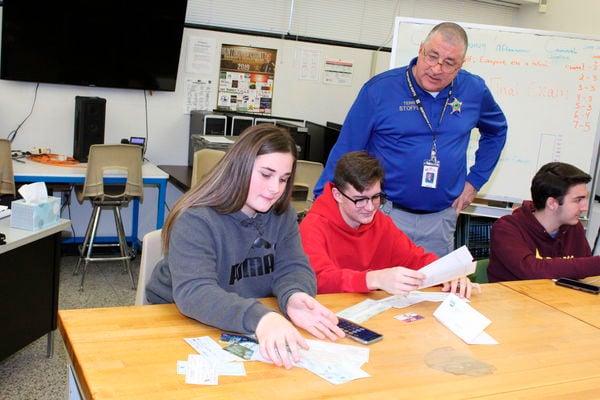 COUNTING DONATIONS: Jozzy Helbert and Zane Howell count donations sent in response to letters to local businesses. Terry Stoffel is using the 'Shop with a Cop' program to give students in his Criminal Justice class at the Learning Center to teach the concept of 'community policing'. 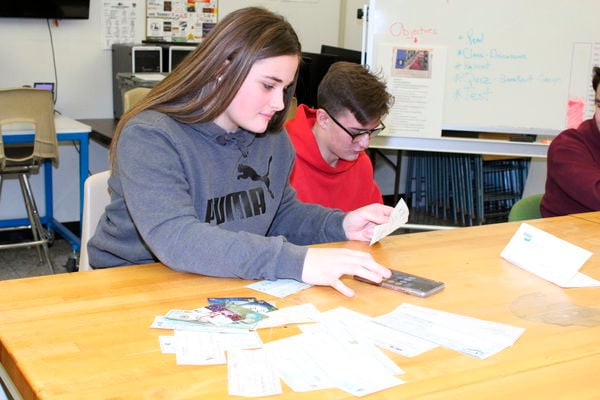 CRUNCHING NUMBERS: Helbert adds up donations from local businesses toward the 'Shop with a Cop' program. Huntington North High School's Criminal Jusitce class set their goal at $4,000 to $5,000.

COUNTING DONATIONS: Jozzy Helbert and Zane Howell count donations sent in response to letters to local businesses. Terry Stoffel is using the 'Shop with a Cop' program to give students in his Criminal Justice class at the Learning Center to teach the concept of 'community policing'.

CRUNCHING NUMBERS: Helbert adds up donations from local businesses toward the 'Shop with a Cop' program. Huntington North High School's Criminal Jusitce class set their goal at $4,000 to $5,000.

Huntington North’s Criminal Justice Class is teaming up with local law enforcement to raise money for the annual community project Shop with a Cop.

The students sent out over 100 letters to local businesses with two goals in mind: to raise money to provide children in struggling families with Christmas gifts and to change the community’s misconceptions of police officers.

“We want to make sure that they feel safe and protected and that police are actually their friends and they can go to them if they need to, while also creating a positive memory and connection within the community for people who are in need,” said Codi Douglass.

In a world where cops are negatively portrayed and perceived by many, the project is an example of what former Sheriff, turned Huntington North teacher, Terry Stoffel calls “community policing.”

“(Some) kids watch their parents get arrested every day but we want to show kids that that’s not the only thing (police) do in the community,” said Coda Ford. “They also help us in the community.”

In their first month of fundraising, the students raised $2,865 for the project, and with only two weeks left to reach their goal of $4,000 to $5,000, the students collectively agreed “we’re gonna do it.”

The Shop with a Cop program first started 18 years ago, and Stoffel has been organizing the annual event since its inception.

Although the concept has remained the same, the number of children the project benefits has increased exponentially. The first program helped four or five kids, but this year the project will help more than 60 children.

“We typically spend anywhere from $100 to $150 on the children – each,” said Stoffel. “We’re talking some big dollars here.”

Half of the gift will be spent on essential items and necessities for the kids, and the other half of the money will go toward anything on their wish lists.

In the Criminal Justice Class, Stoffel wanted to teach the kids about the concept of ‘community policing’ but he wanted to do it in a practical way.

The students say they don’t always think about classmates who might be struggling or in need because they often times are unaware of the problems.

“I grew up struggling because I didn’t have a lot and my little brother, back when we were struggling, he did shop with a cop and he really enjoyed that and he loved shopping with a police officer,” said Katelyn Herford. “At the time he was little so he thought police officers were really cool. It was awesome.”

In addition to the funds the class has raised, they were able to secure a $2,500 grant with Walmart for the program.

Any money that is raised beyond the goal will go toward helping families in times of need throughout the year.

“If it’s not Dec. 25 and they have a need for whatever reason – their house burned down or something like that – there’s always a reserve there to help,” Stoffel said.

Out of all the signed letters, sealed and addressed envelopes, stamped postage, and encouraging responses and donations from local businesses, the students are most excited to see the reaction of the kids they’re helping.

“Seeing the kids be happy,” said Jozzy Herbert. “Because they’re going to be so happy.”

Anyone interested in donating to the Shop with a Cop program can take donations to the Sheriff’s Department at 332 E. State St. by giving it to the front office, or donations can be delivered to Huntington City Police Department at 300 Cherry St.

Donations are preferred in the form of a check instead of cash. All checks made payable to Walmart/Shop with a Cop. The donations will help contribute to the Shop with a Cop Program, and people are welcome to sponsor a child.