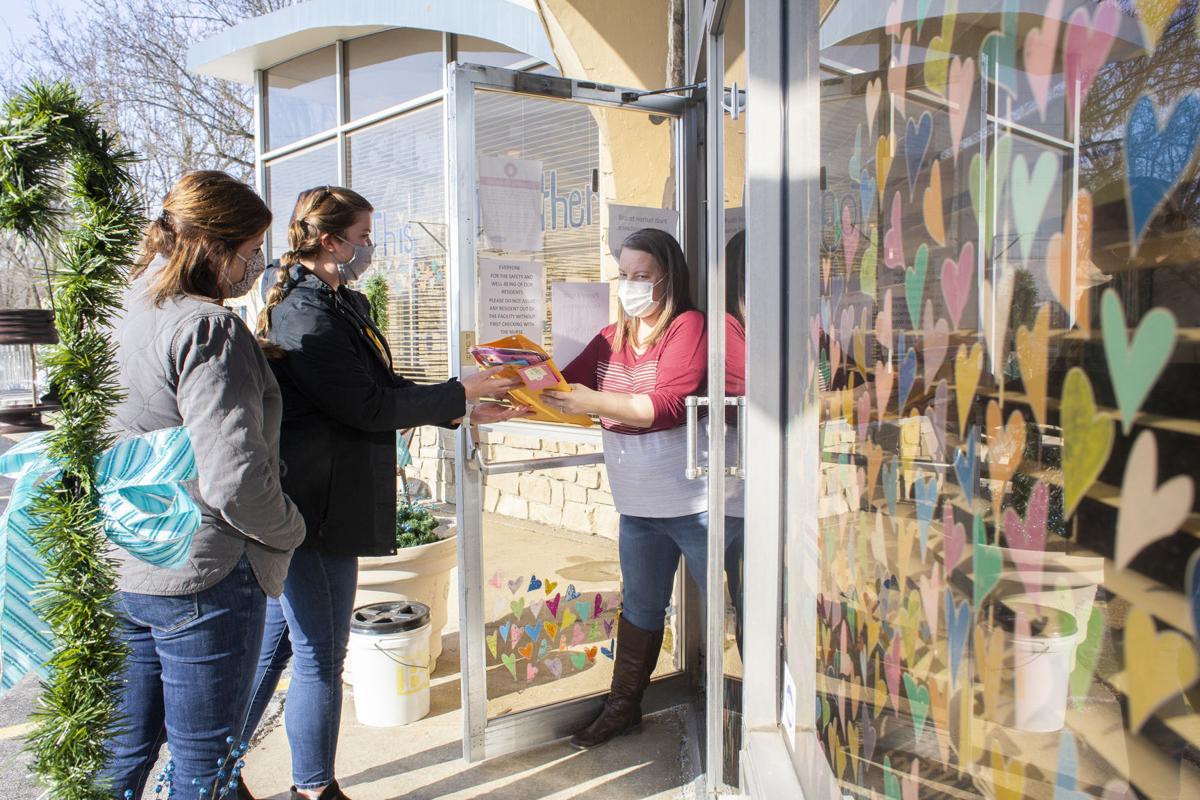 (Left to right) Huntington Parks and Recreation Department employees Megan Thompson and Shawna Balsiger drop off a batch of handmade Valentine’s Day cards to Miller’s Merry Manor Friday, Feb. 12, 2021. Dozens of volunteers made more than 400 cards in less than a month to spread joy to long-term care facility residents within city limits. 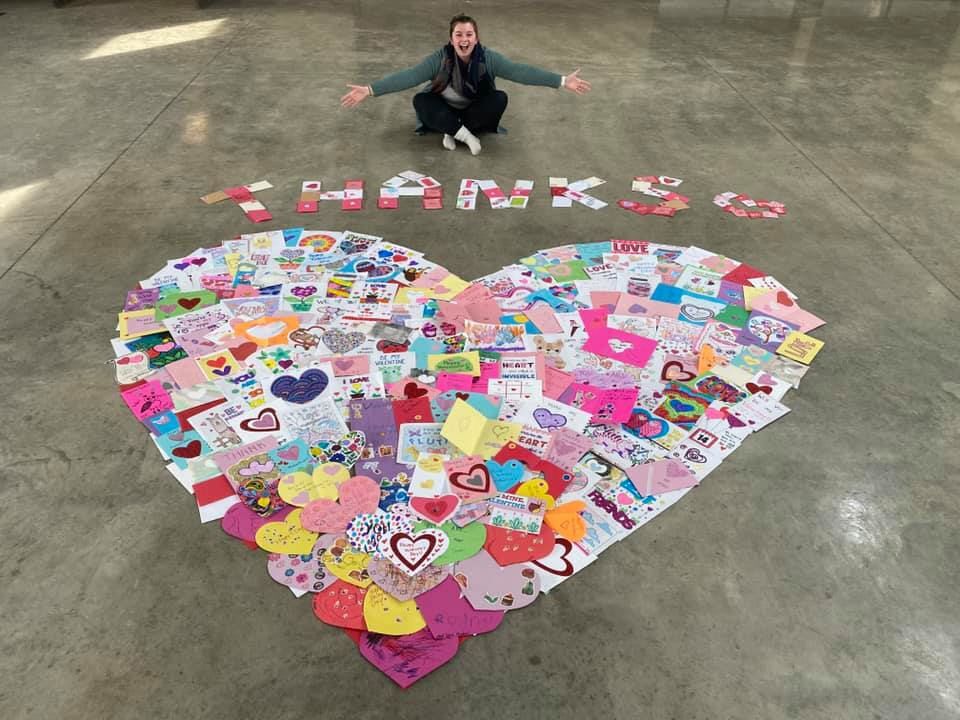 The Huntington Parks and Recreation Department made a large heart, pictured here, with a message that said ‘thanks’ out of all the cards they received over the past month.

(Left to right) Huntington Parks and Recreation Department employees Megan Thompson and Shawna Balsiger drop off a batch of handmade Valentine’s Day cards to Miller’s Merry Manor Friday, Feb. 12, 2021. Dozens of volunteers made more than 400 cards in less than a month to spread joy to long-term care facility residents within city limits.

The Huntington Parks and Recreation Department made a large heart, pictured here, with a message that said ‘thanks’ out of all the cards they received over the past month.

Every resident at a long-term care facility in Huntington will be greeted with a Valentine’s Day card Sunday morning thanks to local efforts.

When the Huntington Parks Department made a post on Facebook Monday morning, they asked the community to help make 50 more cards in order to meet their goal. By the end of the week, the community submitted more than 200. On Friday alone, the city received 85 handmade cards, and they keep coming in.

“We had an event where we made around 35 cards, and we were just going to take them to Miller’s Merry Manor. Megan and I were thinking in the worst case scenario, we can make another 30 so every resident at Miller’s gets one,” Huntington Community Engagement Volunteer Coordinator Shawna Balsiger recalled. “Then all of the sudden, lots of cards started coming in, and they just didn’t stop coming in. It’s been overwhelmingly amazing.”

The idea came about after the city parks department worked on a project around Christmas where they encouraged Huntington residents to send cards to neighbors.

“That didn’t go super well, so when Valentine’s Day came around Megan and I were thinking, ‘What can we do that would impact the community?’ With COVID-19, we felt like nursing homes have really taken such a hit, and we know with the restrictions they haven’t been getting as much love as they normally would,” Balsiger said. “So we specifically wanted to give them a little bit of joy this valentines day, so we thought why don’t we try this again?”

Huntington Parks and Recreation Program Director Megan Thompson said she worked at a nursing home throughout college in a dementia department, so she knows the pandemic must be difficult for residents.

“My heart is with them,” Thompson said. “I know what they are going through, and it’s sad. They are lonely since they can’t have visitors.”

The pair has made a point to reach out to the residents in long term care facilities to try and spread joy during these trying times.

“Megan and I did an event after Megan had the idea to dress up as the Grinch and Cindy-Lou Who, where we walked window to window to window,” Balsiger said. “We saw how much that impacted them, so we just loved that and wanted to do something like that again.”

The card-making project started to pick up steam once students from Huntington North High School’s Campus Life program reached out to the city asking for volunteer opportunities. Soon, churches, preschools, patrons at the local library and people across the county started to chip in. A total of 408 cards were submitted by Friday morning.

“I would say this has been a huge volunteer effort,” Balsiger said.

Thompson’s weekly Walk A Mile participants, who meet weekly at Evergreen Park at 10:30 a.m. to walk as a group, decided to make cards this week since the weather was inclement, and classrooms across the county helped create cards too.

“Each of their cards had a photo of an adoptable animal in it, so that was really cute,” Balsiger said.

“It was perfect,” Thompson chimed in.

Although most of the cards have been delivered to nursing homes already, the parks department said they will still accept cards and deliver them to nursing homes if people want to keep the project going.

“People can send just general cards if they want to, like ‘thinking of you’ cards,” Thompson said. “It doesn’t have to be a specific thing.”

Nursing home directors expressed gratitude to all of the people who participated in the event. They said it’s uplifted resident’s morale, and the parks department said they are hoping to make this an annual event.

“We are probably going to try every year now since it’s been such a great outpouring,” Balsiger said. “I don’t know why we wouldn’t try to do it again since everyone loved it.”