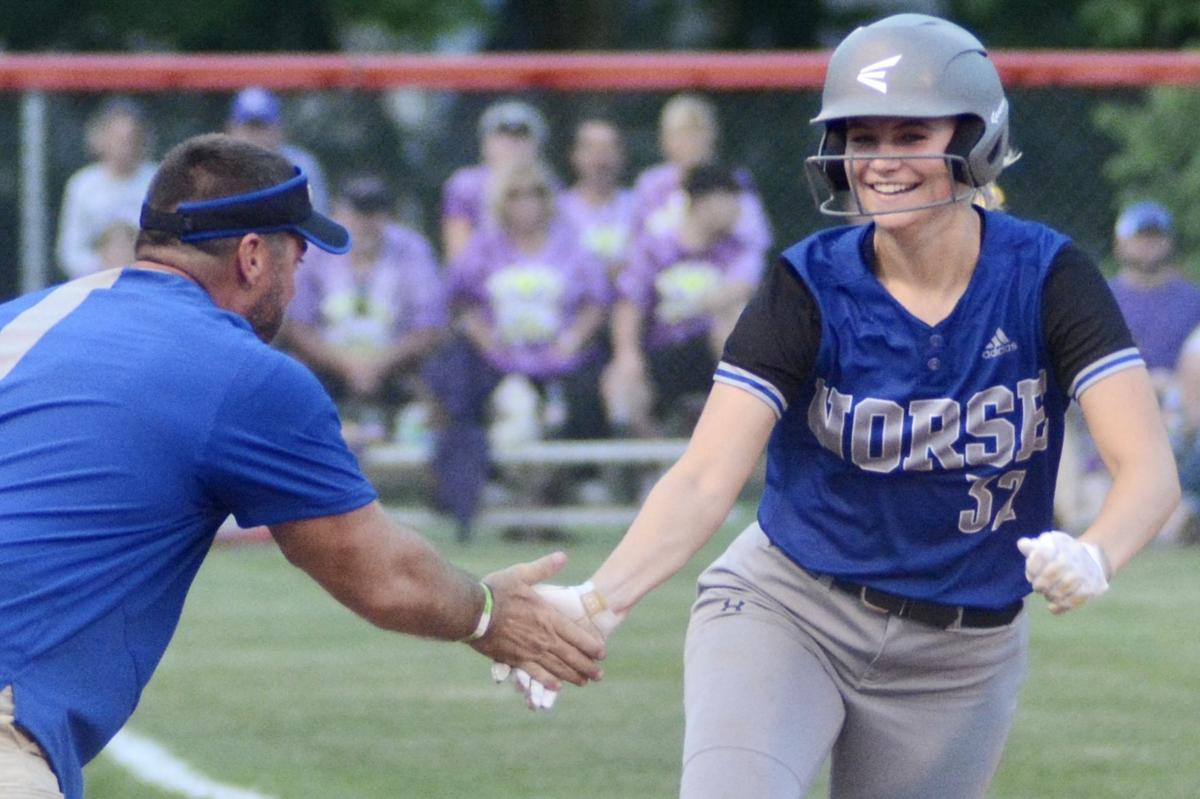 Northfield senior Addi Baker is congratulated by her dad and Norse coach Brandon Baker as she rounds third base after slugging a game-tying home run in the sixth inning of the Class A softball state championship game Friday in Greenwood. Baker added a two-run homer in the seventh to lift Northfield to a 3-1 win over Clay City. 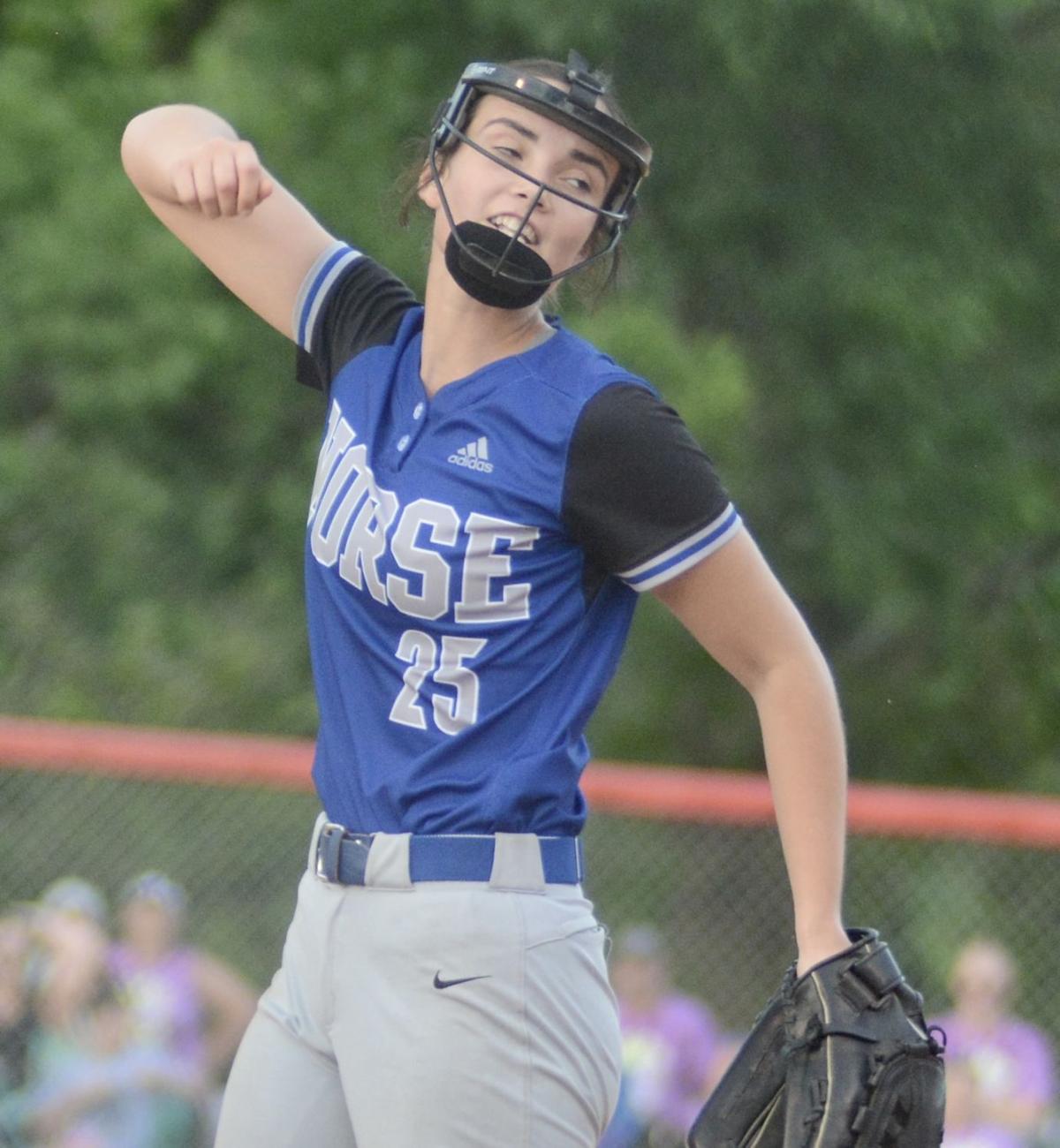 Northfield’s Abigail Hunter reacts to striking out a batter in the first inning of the Norsemen’s 3-1 win over Clay City in the Class A state championship softball game Friday night in Greenwood. 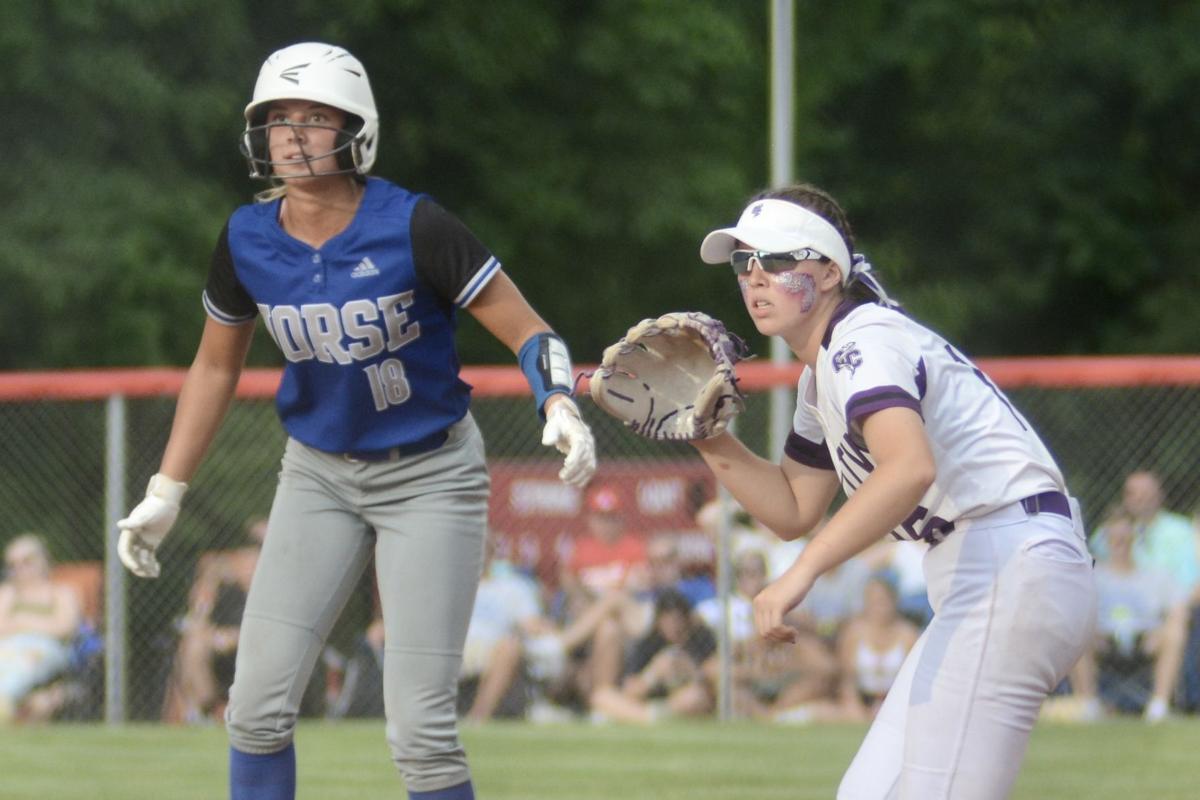 Northfield’s Kyra Kennedy leads off first base in the first inning of the Norsemen’s 3-1 win over Clay City in the Class A state softball championship on Friday. 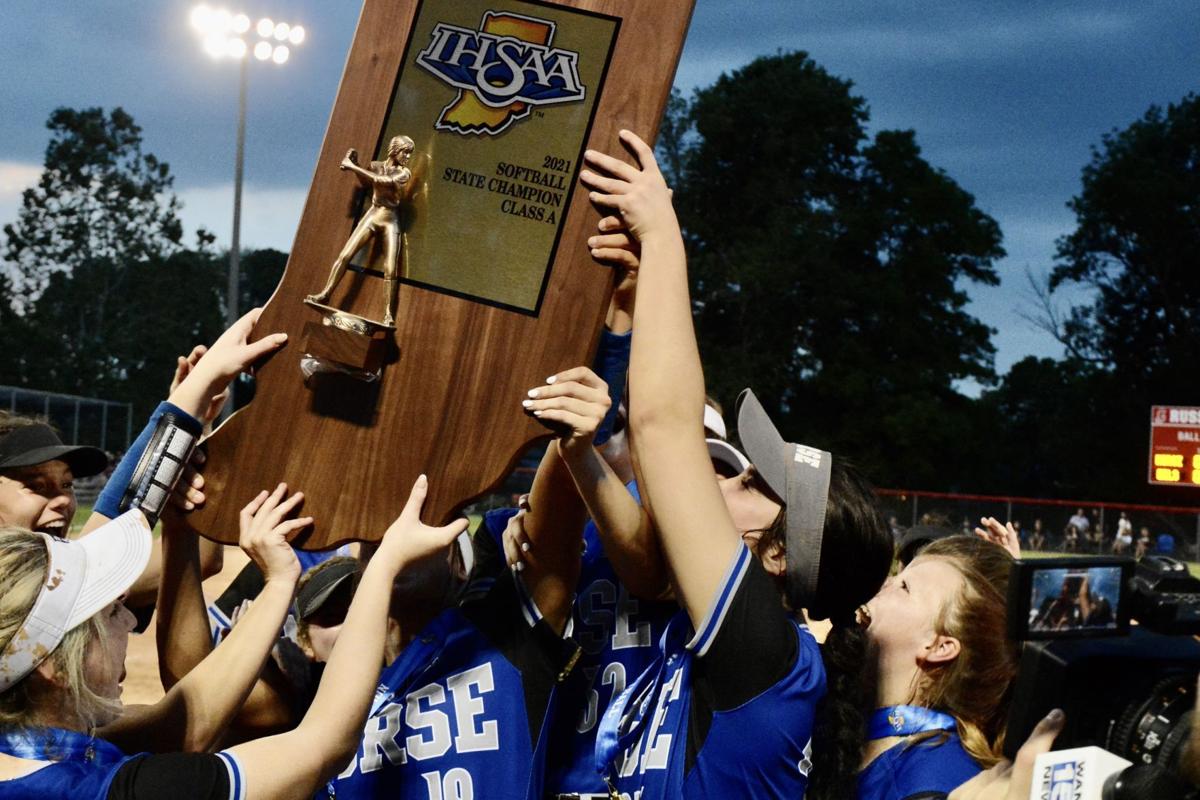 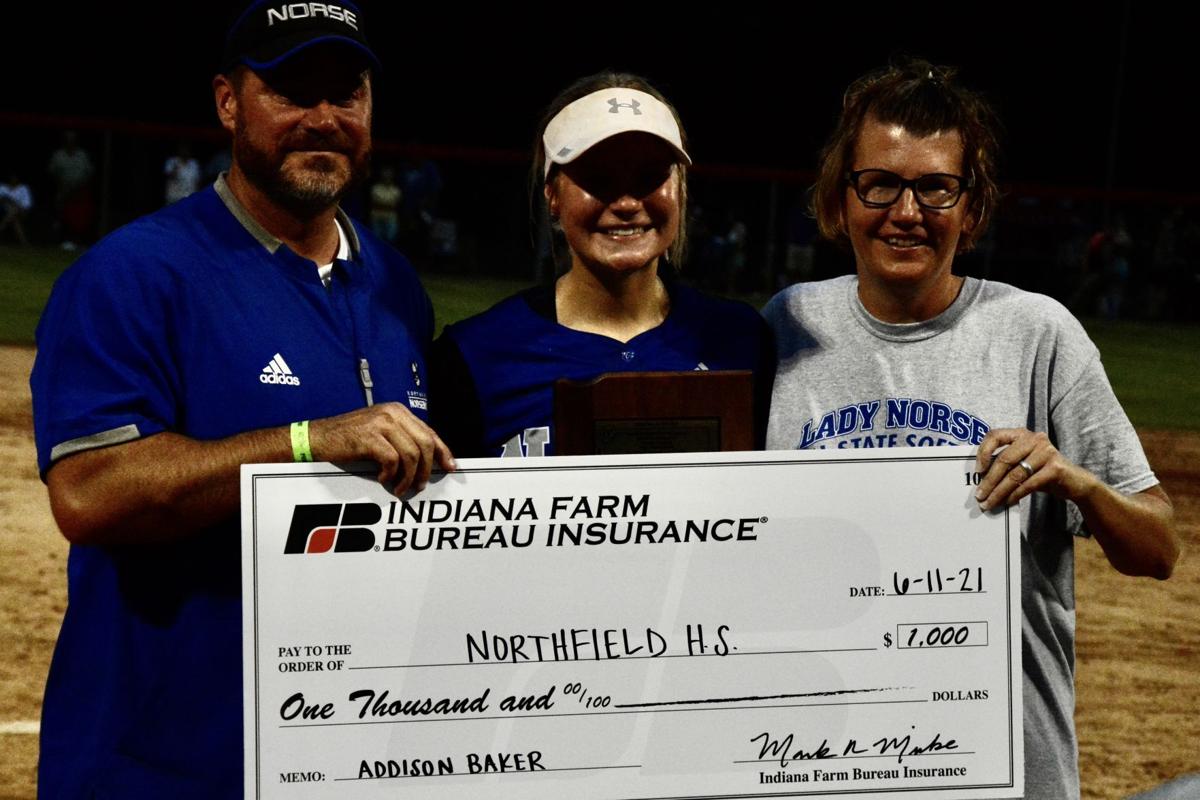 Northfield’s Addi Baker was named the Class A Mental Attitude Awards winner for softball Friday night after the Norsemen captured the school’s first state championship in the sport. Baker is pictured with her parents, Brandon and Jenny Baker.

Northfield senior Addi Baker is congratulated by her dad and Norse coach Brandon Baker as she rounds third base after slugging a game-tying home run in the sixth inning of the Class A softball state championship game Friday in Greenwood. Baker added a two-run homer in the seventh to lift Northfield to a 3-1 win over Clay City.

Northfield’s Abigail Hunter reacts to striking out a batter in the first inning of the Norsemen’s 3-1 win over Clay City in the Class A state championship softball game Friday night in Greenwood.

Northfield’s Kyra Kennedy leads off first base in the first inning of the Norsemen’s 3-1 win over Clay City in the Class A state softball championship on Friday.

Northfield’s Addi Baker was named the Class A Mental Attitude Awards winner for softball Friday night after the Norsemen captured the school’s first state championship in the sport. Baker is pictured with her parents, Brandon and Jenny Baker.

GREENWOOD — Pulling off a good magic act often takes many hours and years of repetitious training before everything comes together and leaves a crowd in amazement.

Northfield’s softball team didn’t use sleight of hand, but a string of magical postseason performances turned an improbable run into a trip to the Class A state championship game on Center Grove’s Russ Milligan Field Friday night.

There, the hard work masquerading as magic manifested itself again, and the Norsemen claimed the first state championship by a girls’ team in school history with a 3-1 win over No. 7 Clay City.

“If you would have told me I would win a state championship, softball would be the last sport I would think it would come in,” said senior Addi Baker, who produced all three Northfield runs with home runs in her last two high school at-bats.

“We weren’t even supposed to win sectional. We’re not ranked. Never were ranked. And now we just won state. We’re the last team left.”

Northfield’s seniors are no strangers to winning and making deep runs in tournaments. Baker, centerfielder Kyra Kennedy, third baseman Jenna Krom and first baseman Kenzie Baer, along with junior outfielders Ainsely Dale and Addy Rosen, twice played for semi-state championships in basketball during their careers, but had both seasons end there.

Baker, Kennedy and Norse starting pitcher Abigail Hunter helped Northfield win its first Three Rivers Conference volleyball championship last fall, so lots of important triumphs and memorable games went into the making of this softball state title, just not all on the diamond.

“When the school year started, if you would have told me this group of girls would go to state, I would have said ‘you’re right.’ Never would have though it would be in softball,” said Northfield coach Brandon Baker, who took the job prior to the 2020 season only to have it shut down very early on by the pandemic.

“But what a time to get hot and what time to put it all together.”

Northfield’s trail to the title was littered with ranked teams: wins over TRC-rival and No. 2 North Miami (4-2), No. 4 Caston (7-4) and No. 3 West Central (2-0) were required to claim the first softball sectional trophy in school history.

The Norse then pounded unranked Fremont (12-0) to win the first regional and upended No. 1 South Central (5-3) and No. 11 Cowan (3-2 in 11 innings) to capture the Northern Semi-state and set the stage for their crowning achievement on Friday.

Hunter mowed down the first six batters she faced, five by strikeouts, before surrendering a walk to lead off the bottom of the third. Clay City added a one-out single before Hunter got a fly out to right and a diving catch of a sinking liner by Kennedy in center to prevent at least one run from scoring.

Kennedy also made a great running catch in the right-center field gap on the second batter of the game to prevent extra bases and another running grab near the fence in left center for the third out in the sixth inning.

“Every ball I have the mentality that I’m going to catch this ball no matter what. I’m just being an athlete.”

Clay City entered the championship collectively hitting .351 with 33 home runs by eight different players. But the Eels managed just four hits against Hunter, two in the fourth inning when they took a 1-0 lead, but the damage could have been much worse.

A lead off double was followed by one of Hunter’s three walks. She knocked down a line drive up the middle on the next batter, then threw to third to retire the baserunner for the first out. Freshman Lexie Thompson’s one-out single knocked home the Eels’ only run.

“We really worked on keeping the ball up and focusing on rise balls,” Hunter said of her approach to facing Clay City. “Whenever I missed it, they hit the ball so I had to make sure I kept it up in the zone.”

Northfield committed one of its two errors to load the bases for Clay City with just one down in the fourth, but Baer nabbed a pop up at first and Dale ran down a short fly to right to leave the bases full.

That changed when Baker stepped up in the top of the sixth. She lined Secrest’s first pitch over the center field fence to even the score at 1-1 and provide an enormous momentum shift.

Kennedy and Baer each had singles in the inning, but were stranded at second and third when Rosen lined out to center for the third out.

Hunter issued a one-out walk in the fifth, but Baker snared a line-drive and fired to Baer to double the runner off first and end the inning. Hunter retired the Eels in order in the sixth, thanks to a nifty back hand snag by junior second baseman Crysta Kowalczuk for out No. 2 and Kennedy’s catch in left center to finish the frame.

Dale led off Northfield’s seventh with a bunt single, placed perfectly between the pitcher and first baseman. Although neither Kowalczuk nor sophomore Ella Hunter could bunt her up a base, it assured Baker would bat one more time in the game.

And again, she delivered.

Junior lefty Sophia Moshos relieved Secrest with one out and retired Hunter, but Baker drilled the second pitch she saw off the scoreboard in left to stake Northfield to its first lead at 3-1.

“I really was just trying to get a base hit. I haven’t been hitting that good this postseason and I knew both of (Clay City’s pitchers) threw all out(side),” Baker said. “I was just trying to throw my hands at it and get a hit on the right side of the field and move people and get something going.

“Both times I hit pitcher’s mistakes. They left them over the plate too much. I knew they wouldn’t do it again so I had to take it when I could.”

Moshos led off Clay City’s final at-bats with a double to left, a ball nearly caught on a dive by Rosen. Krom caught a hard-grounder at third and fired to first for the first out. Rosen then made a diving catch along the left field line for the second, and Abigail Hunter left the circle and made a diving catch on short pop up along the first base line to end the game.

“Knowing my defense has my back, I can trust them with any ball that’s hit,” Hunter said. “I know if I miss a spot they’ll make a play. They’re amazing.”

Amazing pretty aptly describes Northfield’s postseason run and state championship. The Norsemen finished the season 20-9, on a six-game win streak and with gold medals hanging on blue ribbons draped around their necks.

“It is such an unbelievable feeling knowing that all of us seniors have worked so hard to be here today,” Kennedy said. “In every sport we wanted to be here and we finally made it. I couldn’t imagine any better way to finish high school.

Honestly, at the beginning of the season I never imagined it happening. At the beginning of sectional I never even imagined us getting out of sectional,” she added. “As soon as we won semi-state I said we can win state. It’s a crazy feeling to have in your head, to know you have the opportunity to come to state and win.”

“We’ve worked so hard these last four years and just came up short every single year,” Hunter said. “So for the last sport we have together, to be able to come out and get it done, it’s just surreal.”

Coach Baker summed up the accomplishment of winning a state championship and the legacy being left by Northfield’s seniors with simplicity.

“They will go down as the most acclaimed athletes in Northfield history for everything that they’ve done,” he said.

Baker capped her night and career winner of the prestigious Mental Attitude Award.

The award is presented annually to a senior participant in the state finals who best demonstrates mental attitude, scholarship, leadership and athletic ability and is nominated by her principal and coach.

Baker is a member of the National Honor Society at Northfield, serves as a peer leader on the school’s mental health awareness team, and also helps as a school aid.

She was honored with the Three Rivers Conference Distinguished Award, is an academic all-conference selection and is a multiple sport athlete earning four varsity letters each in volleyball, basketball and softball.

Baker is the first Northfield girl to receive an IHSAA mental attitude award. Other previous recipients from the school include Hunter Wells in 2012 and Ryan Keaffaber in 2013, both in Class 2A baseball.

Addi is the daughter of Brandon and Jenny Baker of North Manchester and will attend Southern Illinois University to play softball. She is undecided on her area of study.

Scott Hunt, Chronicle-Tribune sports editor, may be reached by email at shunt@chronicle-tribune.com.